WOW – I can't believe it's back to school already – seems like they just got out of school for summer.  My son is now in Grade 12 so it's going to be a busy year.   My daughter never gets a real break from her school so it's not really "back" to school for her – it's just another week for her.  She only has 2 more semesters left to finish her Diploma in Game Art & Design which is a program focussed on the video game industry.  They really want women to be involved because they (women) tend to create more cerebral games (like puzzle solving) instead of shot em up or sports related.  She is doing so well in the program and is certainly following her passion which is what everyone so be allowed to do.  Hope everyone had a nice Labour Day long weekend.

Here's how I spend my long weekend….on the soccer pitch at a tournament.  This is a new team for Ian and at a much higher level (Gold)  than his previous years in soccer so he's going to have to step up the cardio in order to compete with these guys.  By the end of 3 days, 4 games and many collisions (my son seems to have become  quite a physical player) Ian can barely walk today.  His coach told him "now you know what it feels like to be 60!".  I didn't get very good pictures because I was so into the games but here is Ian with a "throw in" – it was a beautiful weekend, weather wise, and you can see the coastal mountains in Vancouver just in the background of this picture.  Glorious day!

Speaking of soccer (we have a lot of soccer going on in our house and all year long!)

Ian's indoor adult soccer team won their divisional playoffs a few weeks ago – I've been waiting for the team picture but since it's so slow in coming I'll include one of Ian with his medal.  This was a very hard fought season for the team – they kept getting moved up to harder and more demanding divisions and ended up in the Division 1 which is the highest one.  It was quite an accomplishment for them to finish the season in 2nd place and then win the championship game to take 1st place.  Ian scored 2 goals in the final game and ended up 8th in scoring in the entire division (there are probably about 200 players) – not bad for one of the youngest players in the entire league.  Ian and his friend's sister are the youngest on the team – at 16 and 15 and then the rest of the group range in age from 23 – 42 with most of them being in their twenties.  I convinced him to let me take a picture of him with his medal (he was reluctant) because I told him he'd appreciate when he was an old man. LOL  The next indoor season starts again in a few weeks so he'll be busy with 2 practises and 2 games per week (indoor and outdoor) – it certainly keeps him off the streets.

One of the other adult players noticed that the plaque on the medal said "Divisional Champions 2008" and was disappointed it didn't say "Division One Champions".  Another adult male player said " just be grateful it doesn't say co-ed" – I thought this was very funny. 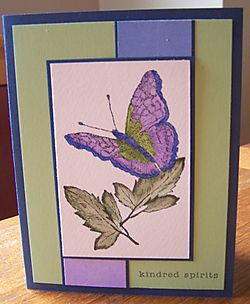 My customer, Jill McNab, was kind enough to drop off some supplies that I'd left at their last club meeting in Ladner and included this gorgeous card AND some blackberry/raspberry homemade jam – yummy on both counts!  I think the stamp set Jill used was On Gossimer Wings – a retired (and one of my all time favourites) set from a few years ago.  Jill coloured the images with Watercolour Crayons – isn't this beautiful?

Jill signed her card "Hooked on Stamping"…how true is that for all of us? Although I think it's more like "addicted to stamping" for some of us. LOL 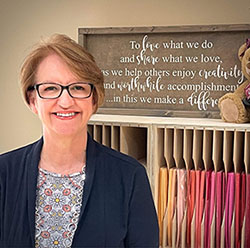 Are you a beginner, casual or avid stamper? I love to share projects for all stampers - whether you are just starting out or have been stamping for years. Stampin' Up! has products for every level of crafter and my goal is to help you with your products and make your card making and scrapbooking easy and fun! I share ideas through my blog and in my monthly newsletters. I'm so glad you have found me here on Stamp Crazy with Alison!

Get news from Alison Solven, Your Independent Stampin' Up!® Demonstrator, in your inbox.

Are you a beginner, casual or avid stamper? I love to share projects for all stampers - whether you are just starting out or have been stamping for years. Stampin' Up! has products for every level of crafter and my goal is to help you with your products and make your card making and scrapbooking easy and fun! I share ideas through my blog and in my monthly newsletters. I'm so glad you have found me here on Stamp Crazy with Alison!

This is my personal blog. The content in this blog is the sole responsibility of Alison Solven, Independent Stampin’ Up!® Demonstrator. The projects shown are for personal inspiration. Feel free to copy for personal use and for use in your classes and workshops. But please do not submit my work for contests or publication and/or reprint my entries without my permission. This site is not affiliated with or endorsed by Stampin' Up!® Unless otherwise noted, stamped images © 1988–2022 Stampin’ Up!®